I must admit, I have been delinquent. Not my normal form of delinquency but the the type that describes cockatoo post-writing laziness. I am going to pass the buck though because, while I would really like to claim complete literary license for all these posts, I do get some help from my mom in writing them. She has been pretty busy these past couple of weeks studying for exams, interviewing for a contract and working.

My grandma and aunt were also in town and she has been spending a lot of time with them over the past week or so. I had the opportunity for short visits with them but mostly, dad and her decided to neglect me (and Sydney) and venture to my uncle’s place almost EVERY evening during the week!!!! My aunt and grandma were staying at my uncle’s place so mom and dad had to go there in the evenings instead of spending their time with me at my home… where I could be the center of attention.

You see, there is a NEW center of  attention in the family… my uncle and other aunt (the one that’s in town) had a baby a few months ago.  Goo, goo, ga ga!!!! WHATEVER!!!! It’s only a human baby! I am softer, cuter and funnier. I still fail to see the big deal of a new human child!

Anyway, I digress (a big word for a little bird)…. I will get back on track with a new post in a couple of weeks providing you with more of my opinionated stories!

In the meantime, in case any of you birdies need some more ammunition to support your cause in convincing those silly humans of the extent of our intelligence, you might want to read them the information contained in the following link from NOVA- ScienceNow.  If that doesn’t convince them, let me know and I’ll dig up some more research to help your cause!

I am sure that some of you have seen the Alfred Hitchcock movie called “The Birds”.  It is a story which involves many murders of crows wreaking havoc on the fear centers of the human brain. 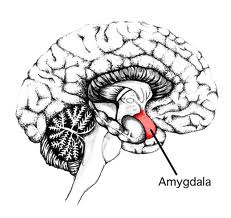 Trust me when I tell you…. crows aren’t only antagonist towards certain human beings! I have had to suffer their wrath too!  It really made me sad though because I always like to make new friends.  Crows are touted as being one of the most intelligent of the Aves but I have to wonder, how smart is it for them not to embrace me as a friend!

As I mentioned in an earlier post, I just LOVE going to the beach and going outside in general. The problem is, however, that the out-of-doors is wild bird territory. On one of my excursions, I was riding on mom’s shoulder, traversing the softball field on the way to the bleachers when out of nowhere I was dive-bombed by a series of crows! Again and again and again by not one, not two but three different crows. I was so scared, I thought that they were going to take a piece out of me or throw me off mom’s shoulders.

They could have been protecting young offspring of theirs but it really felt like they were targeting me because I am white! Reverse discrimination? I thought our society was well beyond that. Why can’t we all just get along in spite of our different avian family backgrounds (Cacatuidae vs. Corvidae)? 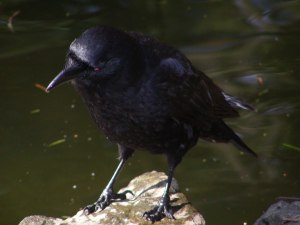 The unwelcoming kind
(don’t let that innocent look fool you!)

Well, that was a few years ago. My more recent encounters with these black “smart alecs” have definitely been more amiable. They have basically come by my log at the beach to sneak away any of my leftover food. I have found that in general they are very cautious — taking a long time before they investigate unfamiliar territory in the presence of humans.

My scariest encounter with the wild kind was only a few years after taking residence with my mom (I had two other homes before she adopted me). She was visiting my human grandparents in Montreal, and left me with this “guy” she was dating at the time. He liked me fine and did want me to have fun so he decided to take me on an outdoor adventure which required a 20 minute car ride.  Oooohhh I LOVE car rides!

He took me to the Juan de Fuca Velodrome in Colwood, British Columbia. Why there? Well my mom and he rode track bikes at the time and I gather he had a very narrow scope of where he thought he could take me. The center of the velodrome was covered in astroturf. There was a clubhouse on one side, and at the time, a mini-forest bounded the remaining circumference of the velodrome. 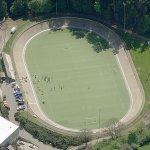 I have only recently been able to remember the incident I am about to recount. It traumatized so much that I must have repressed it in my deepest memories — it was a hypnosis session (undertaken to try to address some of my other neuroses) that brought everything back to the surface.

The “guy” would cup his hands around my torso, toss me high into the air and let me exercise my wings with some flight. I was clipped, so I couldn’t go far and it was scary because I have much less maneuverability not being fully flighted. I guess it was a good way for me to burn off some of those nuts I had stolen from the drawer at home when he wasn’t looking.

We did a number of flying rounds, with the “guy” running a few short meters to come get me after each flight. But then, on the final round, he grabbed me and threw me not only up into the air, but outwards, far forward. I took off and went a long way. Little did either of us know at the time but there was a hawk, likely a Cooper’s Hawk or Goshawk, hiding in one of the trees that bounded the velodrome. He was watching, lurking, waiting…. I was seen as injured prey in his (or her) eyes — an easy meal! 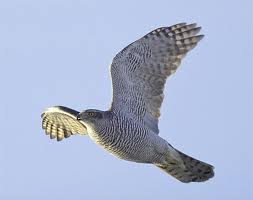 The “guy” noticed just in time and reacted quickly. He leaped to his feet from the crouched position he was in after releasing me to flight, and ran and fast as he could to grab me before that feathered beast got me in his talons. I on the other hand, was in complete and utter shock… I couldn’t move…other than to raise my crest in sheer fright. The “guy”, however, was not the one who saved my life believe it or not. It was another component of wild nature.

On the other side of the velodrome, under the eaves of the clubhouse, was a momma swallow with a nest full of babies. We all know how protective moms can be… especially birdy mammas, but I would have never expected that one species’ maternal instinct could extend to protecting another bird species in obvious distress. Well, that is EXACTLY what happened.

On the sidelines of the main event, momma swallow instinctually knew what was about to transpire as she had seen it many times before and had decided to intercede. She darted quickly out to the field in between the hawk’s trajectory and my head. She managed to divert the hawk back into the trees from whence he came, so that the “guy” could pick me up and I could live another day. I owe my life to swallow mom. I don’t know how she did it, why she did it, or why the hawk was even scared of her at all. I guess it goes to reason that one should never get in the way of a mom. 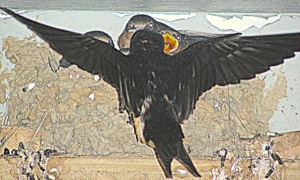 Other than the two specific incidents I recounted above, I also have regular encounters with another bird kind too. I inadvertently have to play, “chicken” with Eagles. I don’t really want to be fodder for them so I don’t purposely taunt them. I notice them quite readily… I give a slight tilt of the head, and eye the skies to find them. A casual observer, however, may but notice a miniscule moving spot in the sky. I do not have the acuity of a raptor but I do have a keen enough awareness to notice them before they can pose any danger to me. I have never really had a true close encounter and I hope to keep it that way. When I notice an eagle, I stay quiet and stick by mom. Usually to offer added protection, she’ll shield me with a cuddle.

In my young innocence, however, when I was a mere 8 years old, one would have thought that I really WAS interested in becoming eagle protein!

In retrospect, I would have to admit that my mom was also rather naïve at the time. She was so interested in spending as much time with me as possible that she decided to take me camping with her on the rugged west coast of Vancouver Island, also known as Eagle country.

To make a long story short, an acquaintance of hers thought it would be amusing to chase after me and watch me run along the ground (they thought my waddle was funny). She did this over and over until I got royally annoyed and decided to run up a mammoth tree. I love to climb and thought nothing of it. I climbed up the large, waterlogged stump, jumped from branch to branch, and then wandered to the end of a well-exposed tree limb that was probably well over two stories high, and decided that it would be a wonderful place to have a nap. 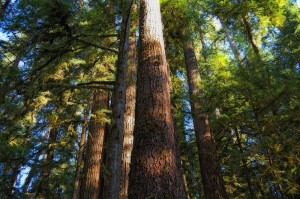 Given that I was this white ball of fluff, completely out in the open — not even shielded by foliage — and we were in Eagle country, my mom became frantic.

The tree was so waterlogged that she couldn’t climb it. We were camping, so there were few if any resources to help get me down from the tree. People started throwing things at me to startle me enough so that I would jump and glide to the ground of safety. I had other plans in mind. I wanted to get some shut-eye and bask in the glorious sun.

When all attempts of hitting me with rope, paper cups and other objects failed, she rushed to the campground office and searched out a tall enough ladder but they had none. She tried, in vain to convince them to call the fire department.

Eventually, she managed to climb part way up the tree and extended her arm out attempting to coax me down. After a few minutes, I realized that I loved her more than my tree spa and hopped onto her arm.

She was so relieved and we both learned a valuable lesson! Never leave a white bird to his own devices in hostile territory!