Bird in the hand

…would be worth two in the bush…if mom’s hand had the necessary parts.

I know, some of you are saying, “ewww” but you have no idea how it is for us birds during the springtime. I can’t help myself.

I am molting now though…on to a new complaint from mom…a big mess of stray feathers all over the place! If we had another cover on top of our couch we could make it a down pillow top. I am losing more of the bigger feathers now as well. I really need new feathers as my old ones get so distressed from all the nest building I do!

– Nice not to have to build it from scratch!

Creating a mess has its consequences. It means that she has to pull out that big red monster that has snake-like parts and makes a lot of noise to clean up more often than normal. She calls it a vaccuum cleaner.

That thing scares the bezedgers out of me. I scream so loud! My anxiety continues well after the monster stops hissing and disappears from my direct view. It is such a negative downward spiral….sigh…

…of the chickens, that is! I wish I could say that I was as “male” as a big rooster but I must admit that in some situations, I am a bit less than manly.

It was such a beautiful day the other day. Mom and Dad were outside on the balcony, forcing me to watch them sip wine from a confined spot in my cage. I was rather displeased. I bobbed up and down on my perch, paced back and forth, and started screaming a bit. Normally, they wouldn’t pander to my drama but I had been cooped up all winter and was beaming to go outside. Mom caved in and brought us outside on the balcony.

True to form however, it wasn’t long before I took advantage of the situation. Slowly and sneakily, I made my way to the balcony rail again and taunted my parents with the threat of my going overboard again.

I was only taunting, I wasn’t really going to jump again like last time but no….Dad had to pick up the pole. He did so to scare me back onto the balcony, but instead, it just startled me off of it. Down I went to the courtyard!

Mom rushed out to get me while Dad kept a close eye on me. Just as she got around to come get me, “swoosh” came an assault at my head. I completed freaked out and like my dad said, I “squealed like a girl”. Both him and mom were laughing in hysterics but I didn’t think it was funny at all. Then he came at me a second time! It was a male robin nesting nearby who was so irate that I was in his territory and thought me to be a threat. I know, I am bigger than him but see how you react when something starts launching for YOUR head!!!

I survived the attacks and mom brought me back home. If it had been a different bird, mom would have been there like lightning to save me. It wasn’t like my last “close encounters with the bird kind”, more like a prequel to it.

I thought I was going to spend the rest of the glorious evening sitting obediently on the balcony, basking in the sun. But lo and behold, just as I get onto my branch, who is there glaring at me from the tree outside my balcony but that evil Robin. It was as if he was saying to me, “Hey buddy, back off of my turf! I KNOW where you live now.”

Let’s see how well he fares next time!

I don’t quite understand that statement! I have heard female humans say that to their male counterparts when they get too randy but for me, a shower (cold or hot) does nothing to quell my urges (although I usually like to take a nap afterwards)!

Hmmm…. maybe mom said that to me because I simply a “dirty bird”? No mind. When I get full of dander, and it has been a couple of weeks since I last “got wet”, I really relish the shower…especially when it is with really warm water!

I don’t know what my counterparts in the wild do…I am pretty sure that they don’t get pampered like I do! I not only get warm showers but I get fully directed ones!

During the winter months, mom brings me into the shower with her and when I am

keen on getting clean

I clamber down the shower curtain liner, spread and flap my wings to ensure all of me gets soaked.

The bad part of the shower is that it eventually ends. I bounce up and down to hurry mom up so that she can lift me off of the shower curtain and take me back to my boudoir! Once I get back to my room, Dad glances over and laughs at me and calls me names like,

He is so mean. I don’t know why he calls me that. The “getting it on” season doesn’t last all year and I don’t proliferate like rats and mice!!!! Besides, I think I am beautiful no matter what I look like. You be the judge!

My mom told me that Depeche Mode sang that song which best explains my behaviour.

I must apologize for these last few PG-rated posts but you must understand that us birdies are governed solely by instinct. We love our humans it’s true but we are only one step removed from the wild unlike our canine and feline friends.

Those furry fellows can get fixed or spayed but that isn’t possible for birdies because our privates are located inside. We are small and fragile under anaesthetic. If the process is possible on us feathered friends, I haven’t heard about it.

Please don’t write in about vets offering the service because I don’t want my mom to get wind of it. I take pride in my loud male squawky bellow! Without my male parts and associated hormones, I might sound too delicate and THAT won’t get me anywhere in view of getting my way!

I am not at it all the time but whenever I have the opportunity to mount Sydney (or to my mom’s dismay, her hand!), I’ll do it. Yes, my mom can just be minding her own business with her hands on her lap, holding her head up or wherever…. and I will FIND IT and start the tail rubbing.

Of course she shoes me away but when it comes to my seasonal urges, I am just like the “cat who came back”. No matter where she puts that hand, I gravitate towards it.

Some of you might suggest counseling but I surely hope that your suggestion for psychological help relates more towards mom than me. With me around, she undoubtedly needs all the help she can get!!!

…the grass is riz, I KNOW where the birdies’ is!!!! At least I know where I am!!! I am in my box getting ready to lure mom inside! I know that sounds perverse…but I love my mom and I want her to check out my nest!

It is spring and there is one primal thing on my mind. Yes, you guessed it… making babies!

Sydney is feeling it too and is being really receptive again. She is constantly lowering her body, cowering and clucking in anticipation of a white bird (that’s me), jumping on her back. As soon as mom looks away, I put one foot on her back and start rubbing my tail on her underside. Mom usually catches us before I am finished. I can’t help it…the urge is so strong and us birds don’t have morals per se so there is nothing to stop me!

We can’t really have babies though although mom gets really mad because she is worried that Sydney will start laying eggs which can put her at risk of being egg bound if she lays continually. To date, nothing has happened. If you are wondering why we can’t have babies it’s because we are from two completely different worlds.

I don’t mean personality-wise (although ask anyone, we have completely different interests, aside from hormonal urges), but literally! While technically not the case, it is as if we went through some form of convergent evolution…. I am from Indonesia – the “old world” and she is from South America – the “new world”.  It has literally been eons since our two native lands were one…during the time of Gondwanaland and our mutual relative on the evolutionary tree…DINOSAURS (more on that in a future post).

As I mentioned earlier on, I would rather have mom join me in my nest but I guess my wooing is only effective on birdies….sigh….. 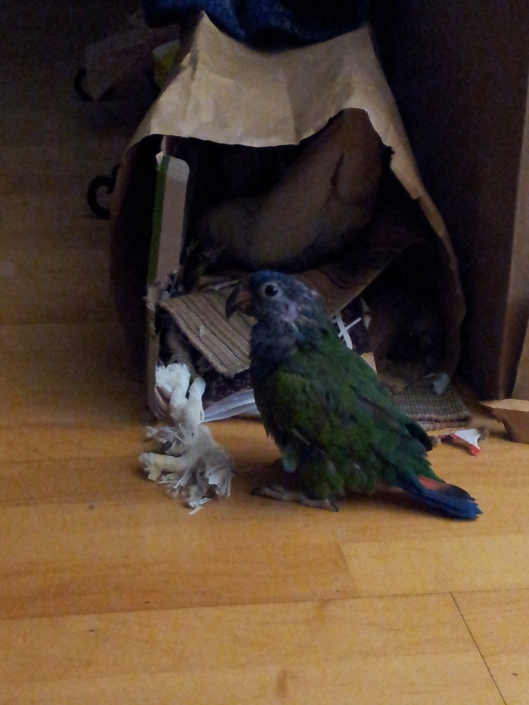 I guess I have stick with second best